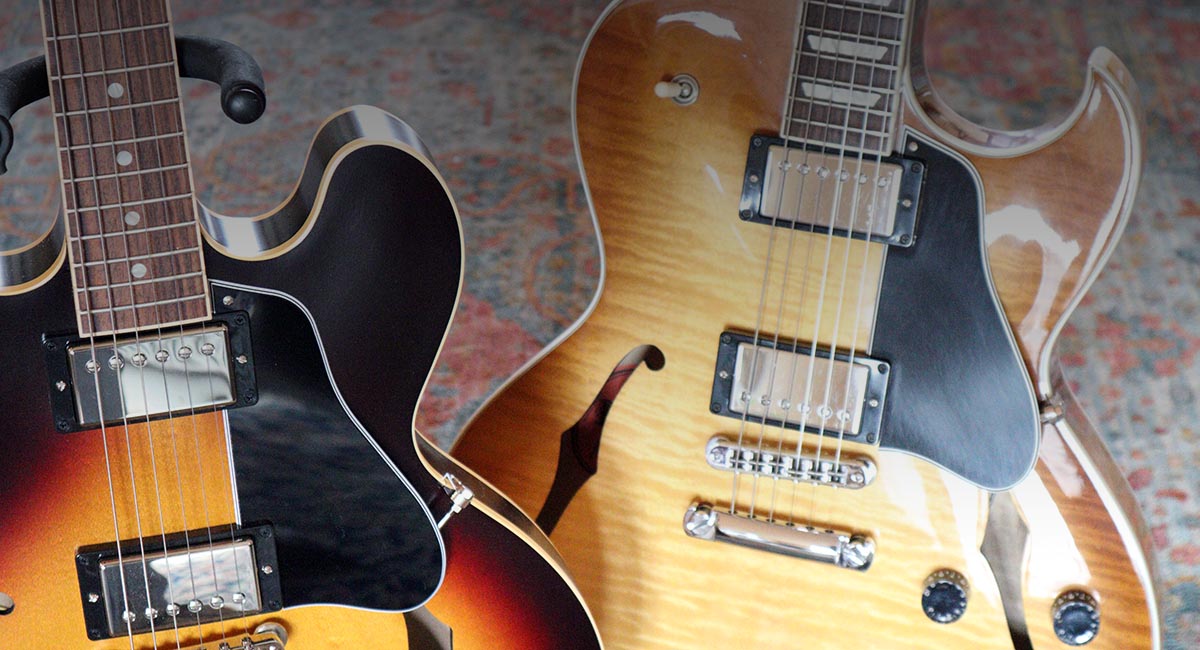 Is it OK to Leave My Guitar on a Stand?

Unless you’re humidifying your guitar with a case humidifier, or have small kids or pets running around that may knock it over, it’s perfectly fine to leave a guitar on a stand instead of keeping it in a case when you’re not playing it.

There are many strange maxims I’ve heard and read on the internet. Some are partially rooted in truth and some leave me scratching my head. This one has a small seed of truth which we’ll explore, but for the most part, in most circumstances, leaving your guitar on a stand will not cause any damage whatsoever to its finish or its structure.

If you live in dry climates, and especially if you burn firewood during the winter, it’s imperative that you humidify your acoustic guitars. An excessively dry climate will cause the woods of a guitar to contract at dissimilar rates to adjacent wood (ie, top wood shrinking faster than the side wood it’s glued to) causing cracks and separation at vital seams on the instrument.

Recommended Article: Everything you need to know about humidity and guitars

So this means that your acoustic guitars need to be in their cases along with a humidifier all the time? Yes, but there is another option. The Dampit is a humidifier that fits inside the body of the guitar and has a plastic cover which fits between the strings and the soundhole that the humidifier hangs from. This design keeps the humidity inside the body of the guitar and supplies the ultimate amount of humidification for your acoustic guitar.

Another upside of the Dampit is that it allows you to keep your acoustic guitar out of its case and sitting on a guitar stand or hanging on the wall from a guitar wall hanger. I’m a big fan of keeping your guitar out of its case, it looks great sitting with my other guitars, and it makes me play it more than if it were tucked away in the case.

While the Dampit is the best humidifier for keeping moisture in the body of the guitar, it is not as good at keeping moisture in the rest of the instrument. One of the biggest areas that consistently dry out on a guitar is the fingerboard, resulting in sharp frets poking out of the side of the neck. While this is a somewhat inevitable occurrence (depending on your environment), it can be mitigated by a good case humidifier that keeps moisture in the whole guitar and not just the body.

Keep Your Acoustic on a Stand

While electric guitars do benefit from proper humidification, the vast majority of them do not require humidification. Check out my article on Should Electric Guitars Be Humidified that addresses this concern.

I have all of my electric guitars out on their stands all the time when I’m not playing them. I like having them out, I think they like being out, and I have never experienced any humidification issues with my electric guitars despite living in an extremely dry climate and a house where I burn firewood in the winter.

Will A Guitar Stand Damage Your Guitar Structurally?

Letting a guitar sit in a standard guitar stand that supports the body from below and cradles the neck will not cause any structural damage to your guitar. The shape of the guitar is full of curves which are incredibly strong and can hold up under extreme loads. Just take the guitar top for example. The total string tension on a standard set of acoustic strings is 160.54 pounds of pressure. [Will Electric Guitar Strings Work On An Acoustic?]

That’s an enormous force pulling the top in the opposite direction as the sides of the guitar. But because of the structural bracing and rounded shape of the rear bouts of the guitar, it can handle that tension without a problem. The weight of your guitar on a stand is a tiny fraction of the weight pulling in the opposite direction from the strings.

As long as the guitar stand is in good shape, with the padding intact and nothing poking out, your guitar won’t have any issues sitting it in for hours while it’s not being played.

Will Hanging A Guitar From the Headstock with a Wall Hanger Cause Damage?

This is a similar answer to the other style of guitar stand that supports the weight of the guitar from the bottom. Compared to the tension of the strings on the guitar, the weight on a hanger will pale in comparison. As long as the headstock is in good shape, keeping a guitar on a wall hanger will not cause any damage.

For this example I’ll use my heaviest guitar. It’s a Gibson ES-137 which is a semi-hollowbody with a big, chunky 50s style neck and a massive mahogany tone block inside the body of the guitar. This guitar is .6 lbs heavier than an ES-335, the semi-hollowbody that all semi-hollowbodies look up to.

Compare that with the nickel 11s I string this guitar with and you have a total string tension on the neck of 117.1 lbs. The weight of the guitar on the headstock is only 7% of the total tension of the strings. A guitar strung with normal steel strings is under considerable tension, and a stand either on the floor, or one that hangs the guitar from the headstock, will have a minimal impact on the overall load that guitar experiences.

The only scenario which I’d be careful about hanging a guitar is if it is old or has undergone a headstock being glued back on (cough Gibson cough). In these situations, the weight of the guitar on the hanger arms could be in a spot which focuses the weight on an already compromised joint. Take extra care if the headstock is a three piece and the glue joint falls exactly where the guitar hangs. Otherwise, don’t worry. Guitar wall hangers are great and look awesome too. Who needs paintings when you have guitars for your wall art?

Will a Guitar Stand Damage Your Guitar’s Finish?

As noted in The Best Capos for Guitar and The Best Clip On Tuners for Guitar, it’s important to get in the habit of removing tuners and capos from the guitar when you’re done with them. The reason for this is that they can cause discoloration on your headstock (or wherever they’re clamped) over time.

This is most common with nitrocellulose finishes that are lighter and softer under continuous pressure than finishes like polyurethane which are typically thick and hard as nails.

First, for any guitar stand that you’re using inspect the parts that will be touching the instrument. Common stands use a durable foam which acts as both a cushion and keeps the guitar from touching painted metal parts and other plastics.

I had an old floor stand where the cushion parts were some type of plastic tubing. Over the years, that tubing dried out and cracked and the material itself started to discolor. This is what you want to look out for and toss it out at the first sign of deterioration.

The biggest concern is that the material that is making direct contact with the guitar is breaking down and will thus seep into the finish on the guitar. If your stand looks damaged in any way, toss it out and get a new one. Stands are incredibly inexpensive and a new one is cheap insurance that you won’t be providing your guitar with permanent smudge marks.

All of my guitars are fairly new and a mix of both nitro finishes and polyurethane finishes, satin and gloss. I’ve never had any issues with guitar stands causing discoloration on my guitars. However, I make sure that the stands are in good condition and I replace them once they start showing their age.

If I had a vintage Strat or Les Paul with a finish showing some wear and most likely some checking, I’d be very careful about where and how I set that guitar. If your guitar finish is aging, it will require more care and caution. However, the vast majority of modern guitar finishes are incredibly strong and will not be hurt by a guitar stand.

A Guitar On A Stand Is More Likely To Get Played

I’ve mentioned this before, and I’m starting to sound like a broken record, but one of the most important things we can do as guitar players is create an environment that encourages us to play. If a guitar is tucked away in a case and requires much effort to set up, it will get played less.

As guitar players we like to think that our love and passion for music and guitar playing is so strong that there’s no way a case would stop us from spending practice time on a daily basis with our guitars. But unfortunately that is not the case and building the discipline that supports a daily routine can be thrown off by the slightest challenge.

Design your practice space so that picking up your guitar is the path of least resistance, and walking by it on your way to do something else is not. If there is something else that consistently takes your attention away from daily practice, put a little more resistance in front of that thing. Play video games when you should be practicing guitar? Unplug your console and put it on the shelf when you’re done. Make playing video games harder to set up than grabbing your guitar and practicing for a half hour.

Create a path of least resistance to guitar playing, and the discipline and habit of daily practice will quickly fall in line.

Takeaways from this article: