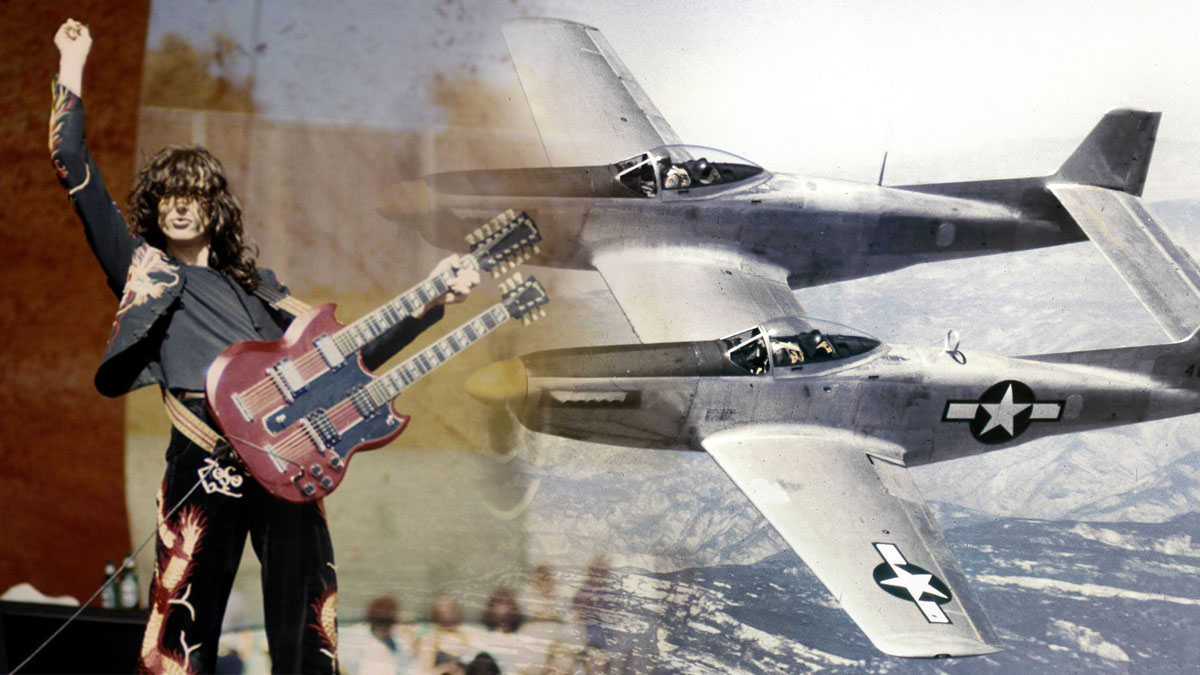 5 Iconic Guitars and Their Airplane Equivalents

This article is for guitar players and aviation enthusiasts alike. Ever seen a guitar and thought, “Interesting shape, that reminds me of an SR-71 Blackbird”? Well me too, and today we’re looking at 5 iconic guitars and their airplane equivalents.

This is both a nod of appreciation to the guitar makers who had the guts to think outside the box when it came to their aesthetic creations, and to the aircraft designers who have made some truly outlandish looking airplanes fly.

Bo Diddley built his own guitars out of cigar boxes creating the distinctive shape of that came to be closely associated with him and his music. Gretsch guitars later began making his guitars for him, and introduced the Bo Diddley signature model in 1999.

While most modern guitars have body relief that makes the instrument sit more comfortably and more naturally against the player, the Bo Diddley guitar doesn’t worry too much about that. Does it look like a beast to play, sure, but doesn’t it also look like a resourceful Rock and Roller slapping together some strings on a cigar box to bang out those dirty blues.

Whether you love the design of the Bo Diddley guitar, or think it’s abhorrent, it is an icon of blues and rock history and will forever reside in the pantheon of legends. Both the guitar, and of course Bo Diddley himself.

The C-23 Sherpa is a small military transport aircraft designed for STOL (short takeoff and landing) applications in unknown or unimproved strips. The chord (width) of the wing is comically small compared to the monstrous box of a fuselage, a combination which makes an unmistakable shape when seen from the ground.

The boxy fuselage and striking red colors of the Sherpa make me think of Bo Diddley’s guitar every time I see it flying around.

The Gibson Explorer and The NASA AD-1 Oblique Wing

The Gibson Explorer was designed in the late 50s and represents the collective imagination of the United States at the time. It was futuristic, and looked like it could sit alongside the implements of the early Apollo space crews. Was there ever a guitar on the moon? Unfortunately no, but if there was I don’t think there would be any question that it would be the Gibson Explorer.

Interestingly enough, the early design may have been a bit too dramatic and innovative for its time. Sales were incredibly low in the first production run, and Gibson discontinued the line in 1963. It would reissue the guitar again in 1976 when some of its competitors found success in similarly shaped guitars.

The Gibson Explorer represents an exciting time in our history, one where the shackles of the imagination were being broken away, and the ideas of space were beginning to take hold. Even though Eisenhower was staunchly against the later developments of the space program, the geo-political movements, and epic achievements like the launch of Sputnik in 1957, ignited both fears and dreams which can be seen in things as seemingly tangential as electric guitar designs.

Which brings to mind, the NASA AD-1 Oblique Wing test aircraft. This aircraft was flown between 1979 and 1982 and was designed to test the idea of a pivoting oblique wing. The advantage of this is decreased drag at higher speeds which would increase overall speed and decrease fuel consumption.

There are a large number of applications for this type of technology, specifically for long commercial flights. And while NASA’s testing was lacking in some areas due to the low cost and associated shortcomings of the platform, the program collected valuable data on which more research can take place. [NASA]

Now if that thing can fly, let’s strap a couple jet engines to a Gibson Explorer and see what happens.

Similarly, while Jimmy Page wasn’t the first professional musician to play this guitar, he is the one who made it famous by using it on Led Zeppelin’s live performances of Stairway to Heaven.

This is one of those really specific guitars that has an incredibly specific purpose. The guitar’s necessity is based around a single song. And I can’t think of any other rock songs that could necessitate such an epic guitar like the double neck SG.

Which brings us to the equally epic North American P-82 Twin Mustang. While the P-51 Mustang was born from a necessity for a long range bomber escort, the P-82 was called upon to extend that range even further. The P-82 was originally designed to escort the B-29 Superfortress on missions that exceeded 2000 miles. This topped the P-51’s drop tank range by about 500 miles.

The P-82 survived long past 1945 when they flew and provided long range mission capabilities and attack capabilities in the Korean War alongside the short-range might the jet fighter age had introduced.

What’s cooler than a P-51 Mustang? Well, not much to be honest, but slap two of them together and you got something pretty hard to beat. Unique, wild, and epic. The P-82 Twin Mustang is the odd sibling to the Gibson Double Neck SG.

Love them or hate them, Gibson has a knack for taking risks and being a leader in the industry. The iconic guitar designs of the 1950s and 60s are considered to be the pinnacle of guitar design by most players. I think it’s important to note that many of those early designs didn’t resonate and become iconic until much later. In many aspects, Gibson was way ahead of its time.

While the Flying V design came out alongside the Explorer in 1958, the reverse Flying V didn’t come out until years later, and feels more like an elementary science experiment than a serious design endeavor.

At any rate, here we are with a Flying V, but turned around. You know, cause why not. It looks awkward and you only have room for 1 volume knob, but it’s certainly unique.

And what better pair for the Gibson Reverse Flying V than the Grumman X-29 with forward swept wings. Similar to the NASA oblique wing testbed, the X-29 was built to test the aerodynamics of a forward swept wing.

While wings are typically either perpendicular to the fuselage or swept backward, forward sweeping wings offer a uniquely unstable platform. The advantage of an unstable design is an increase in maneuverability. And with the development of computer aided and fly-by-wire systems, an airplane that would normally be unflyable by a human could now be tamed.

The X-29 was possible because of the development in material technologies, specifically carbon fiber, which allowed for the incredible strength needed to counteract a twisting motion in the wing.

While both the airplane and the guitar were designed from preexisting models, I’m going to have to favor the X-29 here. There’s just something about that reverse Flying V. Just because you can doesn’t mean you should, I suppose.

Willie Nelson’s Trigger, and the B-17 Flying Fortress

Last on our list starts with the iconic Martin N-20 Nylon guitar that became known as Trigger, a name given to it by its new owner Willie Nelson. This Brazilian Rosewood bodied nylon stringed classical guitar has been Nelson’s workhorse (pun intended) for decades and those years upon years of use certainly shows.

Nelson has famously said, “When Trigger goes, I’ll quit.” That’s some dedication right there, but I’ve got a feeling like Trigger will always have one more in him. There is an enormous hole worn through the top of the guitar behind the soundhole, exposing the bracing. Despite the obvious wear and tear, you can be sure that Trigger receives only the best quality of care. If nothing else, to keep Willie from quitting.

The only airplane which can share the podium to the resilient Trigger is the B-17 Flying Fortress. The B-17 first flew in 1935 and later became a strategic heavy bomber for the allies against the axis forces. The Flying Fortress dropped nearly half of the 1.5 million tons of bombs on Nazi occupied territories during WW2.

While the B-17 was armed with 5 .50 caliber machine guns, its mission often put it in range of enemy fighters and ground based anti-aircraft munitions.

After a detailed analysis of the fighter attacks on B-17s, it was found by the Germans that on average about 20 hits with 20mm shells were required to bring down a B-17. During the war, pilots could only hit with 2% accuracy so a pilot had to fire almost a thousand rounds before a bomber could be brought down!

While it was difficult to bring a B-17 down, many took significant damage but continued to fly, bringing their crews safely home. There are amazing photos of B-17s with huge chunks of airplane missing, yet they managed to limp her home. Without such dramatic engineering bomber casualties would have been significantly higher.

If there are guitar, airplane combos that you think go great together, shoot me an email at tgp@theguitarpages.com, and I’ll make sure to get it in the next Iconic Guitars and Their Airplane Equivalents along with a credit. Thanks!